Google Contributor: An Alternative Way To Pay For Content 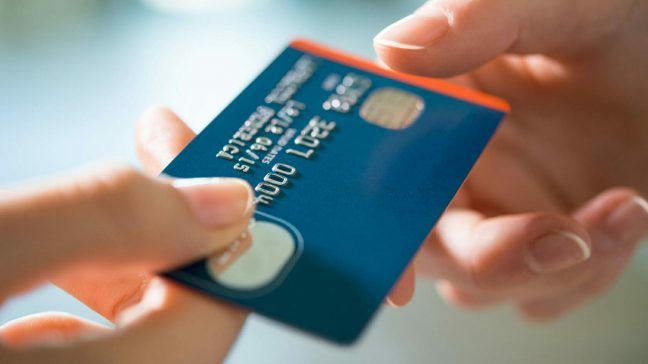 Last year, Google announced a new “experiment” called Contributor as an alternative way for content creators to fund their websites. Offered as an alternative to their AdSense network, the service lets users subscribe to a service that will remove advertising on participating websites for a monthly fee.

Currently in an invite only Beta, Contributor offers subscriptions that remove a percentage of advertising users see when they visit participating websites. In exchange, the domains will receive a portion of that subscription fee to compensate them for the lost ad revenue.

Subscriptions range from $2 to $10 monthly, with the average number of ads removed increasing the more you are willing to pay.

When a subscriber navigates to a participating website, instead of seeing Ads, a pixelated image occupies that space instead, with text thanking them for being a sponsor. This goes for mobile and desktop browsing, though the webmaster can choose to remove ads entirely from the mobile experience if they choose. 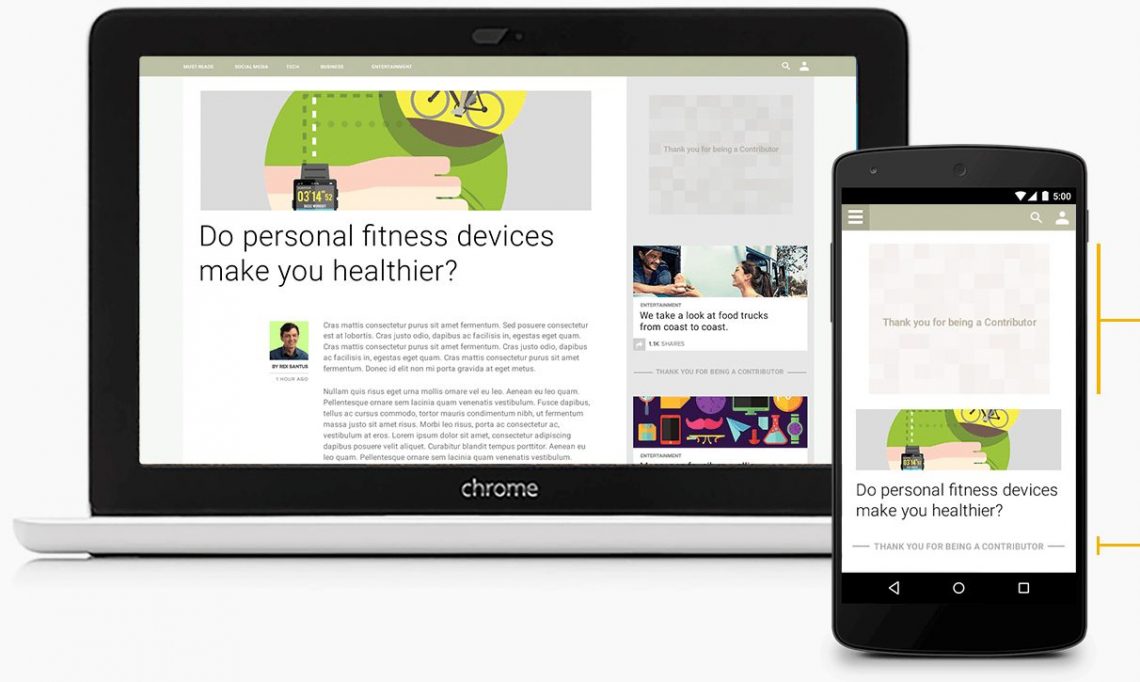 Unsurprisingly, Google offers subscribers advanced features for how they can use the program, including:

Currently, there is no way to remove all advertising from a participating site, but this is not surprising since the program is still in a limited trial and the service may not be a profitable one for webmasters. If the service can provide them with a revenue stream that matches or even exceeds what they make from advertising, higher tiers could become a possibility.

Details on revenue sharing and profitability are still scarce, though this information is subject to change as the beta service adapts to the internet environment. If Google makes the service public, the documentation on the official site will improve.

This week, the company announced that they now have “millions” of participating webmasters and began inviting beta users to trial the service. If their service proves popular, it could have a dramatic impact on the digital landscape, particularly for those companies that rely on advertising to get their products in front of potential customers.

For eCommerce sites, making money online is relatively straightforward. Attract an audience, offer them products or services they desire, and then find ways to get them to convert. Selling online isn’t simple, and unless you’re an established brand it’s rarely easy, but it’s one of the surest ways to make money online.

For websites that offer content to visitor’s, either media (such as YouTube), or through written articles, reviews, and opinion pieces, the path to profit isn’t so clear. With the notable exception of print-media giants such as the New Your Times, many creators rely on ads to provide them with income.

In the past, this offered them a lucrative revenue stream, one that let some popular sites to pay for a full-time staff. Unfortunately, some webmasters took this too far and filled their customer’s screen with obtrusive advertising. These ads could range from affiliate links to sidebar ads to auto-play audio hidden behind the screen using unsecure flash players, exposing visitors to potential malware.

Users found these ads to be so disruptive that they sought alternatives. Some found smaller, less well-trafficked sites that were not aggressively advertising. Unfortunately, as these smaller domains gained popularity, many adopted these unpopular tactics. This led to AdBlock.

AdBlock Is Not The Answer

AdBlock is an extension that users can install in both the Firefox and Chrome browser that blocks most advertising, offering what the creators call a cleaner web experience. Since most sites are built on a responsive design, blocking advertising allows the content of that site to fill most of the browsing screen.

Unfortunately, AdBlock also prevents webmasters from generating revenue, since users will not click on (or see) the advertising. Of course, not everyone who visits their site will have the extension installed, but it is becoming increasingly popular as the number of tech-savvy web users increases.

Even if just a portion of a website’s traffic employs AdBlock, the results are devastating for domains. The group behind AdBlock realizes this, and so they created “acceptable ads” criteria, which is a filter to allow what they define as unobtrusive ads through their blocking network. This is an option, however, and users can still choose block all advertising.

Faced with declining revenues from ad traffic, webmasters have a difficult choice; find some other way to make money, or increase the number of ads displayed on their site, maximizing the revenue generated from users not using the extension. Many domains choose to increasingly aggressive ad tactics, which in turn drives more users to install AdBlock, reducing revenues further. It’s a vicious cycle that content creators are desperate to escape.

Google Is Not The First Company To Think Of An Alternative

Contributor is unique since the company offering it also manages the world’s most profitable advertising network, but it is not the first attempt made to solve the delicate issue of making money online. New content creators hate advertising as much as their audience does, meaning that they often risk their finances to try these options.

Employed by large traditional print magazines and newspapers, this method requires users to pay a monthly fee to access most of the content. Established companies like the Wall Street Journal rely on brand equity to draw subscribers.

Unfortunately, this tactic is rarely effective for even established brands. These sites still rely heavily on ads and their shrinking print subscribers to generate revenue. For the writers, this often means smaller paychecks. In fact, a Pulitzer prize winner recently quit his writing job because even an award winning author can’t earn enough to pay his rent.

For new businesses, a paywall rarely works. The Magazine only managed to stay afloat for two years before realizing that the model is not sustainable.

Kickstarter, and newer efforts like Patreon, allow content creators to seek funding directly from their fans. By soliciting small donations from their broad readership, these webmasters host their content for everyone, ad free.

Relying on the generosity of your customer isn’t a new trend, though it’s one that creators are increasingly interested in, particularly those who dislike the ads model to begin with. For many individuals, particularly musicians and artists, this method gives them the capital they need to make a living doing what they love. It is not clear how sustainable this model is, however, as even generous users can only support a small number of content creators.

Instead of allowing companies to bid on ad space, webmasters will collaborate with companies to produce long form content, offering readers exclusive or in-depth coverage on a particular product or service in exchange for a substantial payment.

For popular sites, this is a valid alternative, but many content creators, particularly those offerings news and opinions, find this form of payment distasteful.

What makes Contributor unique is that it’s back by the same company serving AdSense. This is what makes their subscription model possible. As the largest provider of ads, the service is potentially more attractive to customers who want to compensate creators for their work, but also find advertising disruptive.

This Could Change Paid Advertising For eCommerce Marketing

While Contributor’s subscription model does not apply to Google search ads, with the search engine claiming millions of participating sites it could impact the marketing strategies of eCommerce stores across the rest of the web. If the service proves popular, it will reduce the number of ads displayed, which mean fewer “impressions” for your marketing dollar.

It’s likely that most of these participating sites are low traffic blogs, but the revenue sharing is apparently lucrative enough to attract popular sites like Science Daily, Imgur, and Mashable. Tracking cookies that use a customer’s browsing history to serve relevant ads offsite are less effective when that user can opt to see pictures of cats instead.

Contributor is just one piece in the evolving nature of the web where the only constant is change. It’s not clear yet how popular the platform will be, but it is something to consider while building AdSense campaigns. The invite-only system should not have a direct impact on impressions yet, but if the service follows the pattern of the company’s other “public beta’s” like Gmail, Google+, etc., the number of users could increase quickly.

Effective digital strategies are multi-faceted and adaptive. Contributor adds a new wrinkle to the landscape, one that should prove interesting to track. 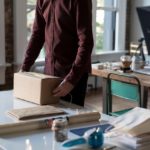 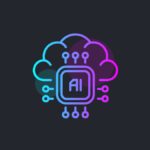 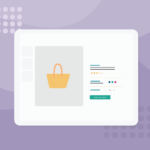 Drive campaign results and automation excellence while taking your email to the next level with our 2021 Email Playbook (PDF).

Founded in 2006, Trinity is the human touch behind digital experiences. We're a dedicated optimization team with a full suite of professional services to propel your brand past the competition.
© 2021 Trinity Insight, LLC. All Rights Reserved.

REGISTER
We hope you found this article helpful!
Would you like more insights?

Get our latest strategies and insights delivered straight to your inbox.